Language courses and especially language trips are well suited for gaining experience abroad and getting to know interesting cultures and people. But of course, the main goal of language courses is to improve your foreign language skills in order to possibly do an internship abroad, spend a semester abroad, or have better chances on the increasingly international job market. Language tests are standardised in order to be able to prove one's abilities in as much detail as possible. The Common European Framework of Reference for Languages is now used to classify language levels. According to this, there are competence levels A1 for beginners to C2 for experts. The levels are not only suitable for foreign languages, but also for the mother tongue itself. Many language schools or institutes organise their language teaching in such a way that it is aimed at a specific target group whose language level is comparable.

This not only ensures a pleasant, frustration-free learning experience, but also ensures that every language student completes the final test well.
Many language test organizers and language schools offer placement tests for your current language level so you know how to prepare or which language course is right for you. Here you will find a good general test for English from EF and here language tests for different languages .
Whether you need a certain level of competence for your semester abroad or want to improve your business language, there are special tests and certificates for all these areas:

With 5 million participants annually and worldwide recognition, the TOEIC Test is the largest language test and is particularly suitable for certifying Business English, i.e. English at the workplace. The test consists of situations as realistic as possible such as telephone calls, order and sales conversations and tests the language student in the 2 language categories:

The evaluation of the TOEIC test is primarily about coping with situations in everyday business life rather than simply mastering grammar. The "Test Of English as a Foreign Language", TOEFL , is a language test developed by the non-profit organisation ETS, which tests the English language skills of people seeking an academic career in an English-speaking country, i.e. students or doctoral candidates.

Accordingly, this test is particularly demanding and, unlike TOEIC, also tests grammatical and written skills as well as scientific vocabulary.

The current standard test is the TOEFL iBT, which is internet-based and therefore the test results are available online after about 10 days. There you will also find a number of sample questions about the test. Nevertheless, it will be taken in one of the local ETS test centers after prior online or telephone registration and payment of an examination fee of currently 245 USD.
If the result is not satisfactory, you can repeat the test as often as you like after a 14-day waiting period. The certificate is valid for 2 years.

Meanwhile, up to 10,000 universities require the TOEFL as a prerequisite for admission, usually the required points are between 80 and 90, with elite universities, such as Harvard, between 100 and 110 of a possible 120 points. Who would like to take a TOEFL test, prepares usually between 3-4 weeks for it. In combination with an intensive language course, this should also be possible more quickly. DELF or Diplôme d'Etudes en Langue Française is an internationally recognised language diploma and is used to assess the French language proficiency of foreign language learners according to the GER scheme. However, the certificate only includes competence levels A1-B2 (independent use; advanced). The DELF is standardised, but does not have a fixed focus, but covers general French usage.

Here, too, the student's listening, reading, speaking and writing skills are assessed. In contrast to many other language tests, the language level to be achieved is determined before the test begins. Depending on this, the tests are slightly different in structure and length.

Because of the different tests, it is best to take a few placement tests before making a decision. These are often offered by language schools for their preparation courses. The Institut Francaise also offers a free online placement test. The organizer of the exams is the Institut Francaise, which has 21 locations in Germany alone where a DELF test can be taken 5 times a year. 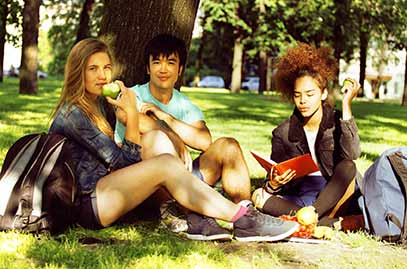 The Cambridge Certificate of the non-profit organisation Cambridge Assessment is one of the oldest language test series for non-native speakers and includes examinations for Spanish and French in addition to English. Due to its proximity to Cambridge University's language research, the certificate is particularly renowned and is regarded by schools, universities and employers worldwide as a prerequisite for admission or recruitment.

Similar to the DELF, there are different examination series depending on the competence level of the CEFR, or the target group, i.e. pupils, students and academics, or business people, but also English for certain business areas such as finance and law.

With the help of a placement test, the right test can be determined in advance. In contrast to other test series, a Cambridge exam can be passed or not passed, but is also valid for life if passed.

A Cambridge certificate can be taken independently in a test centre, but many language schools can also take the tests independently on fixed examination dates. Preparatory exams are also possible. Online, Cambridge Assessment offers a free placement test. The DELE- Diploma is THE officially recognized certificate for Spanish as a foreign language. The organizer of the certificate, the public Instituto Cervantes (equivalent to the Goethe-Institut in Germany) is directly required by the Spanish government to issue this certificate.

There are different language tests for different professions and levels. The DELE certificates are internationally recognised throughout the Spanish-speaking world. In Spain they are widely accepted as a language qualification by private and public institutions, universities and other educational institutions.

Like the Cambridge Certificate, the DELE diploma is permanently valid after it has been taken in one of the test centres. Many language schools offer DELE preparation courses or organise language trips to Spain or Latin America. At the end of the usually 4-week period, the DELE exam takes place.

At the DELE there is a corresponding exam for each European language competence level, which then also has a different length. The longest exam lasts approx. 4 hours and includes written, oral and listening comprehension tasks. Once you have passed the exam, you will usually receive your results after about 40 days.

There is a free Spanish placement test to help you assess your level. If you would like to take a language course at a language school abroad in preparation for one of the language tests, you should definitely consider taking out an international health insurance, as your German statutory health insurance is limited or not at all depending on the destination country. For language students, we have developed a product that is precisely tailored to their needs: Care College.

To find the right health insurance for your project, simply enter some data in our tariff finder and you can take out the insurance quickly and easily online. We can also help you by phone at +49 228 97735-44.

Maybe you are not yet sure if and what you want to study. Then the Gap Year is the ideal solution for you. Gap Year means time-out...

You want to experience a little adventure and don't know yet how to continue after your A-levels? Then take advantage of the countless working holiday opportunities

If you already know exactly where your future career should take you, you can jump straight into your studies.

Baseball, cheerleaders, and endless highways. If that's your dream, do a high school year.

Probably you have dealt little with the topic of health insurance so far. No problem! We have compiled important information for you, e.g. when you need international health insurance.